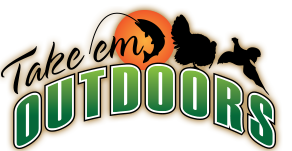 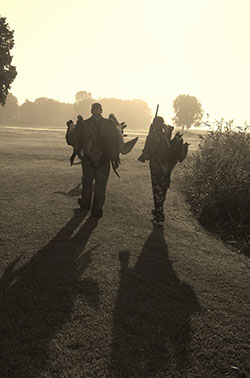 As parents we are always striving for ways to improve our sons quality of life, after all we have fought so hard to save it! In 2005, the painful words that our child had cancer, would change our lives forever. Our then 8 year old son Austin wasn't able to participate in most daily childhood activities, especially sports. Take' em outdoors offered Austin his first ever pheasant hunt that we didn't even think was possible. He was beaming with excitement as we stood in the beautiful Wisconsin wilderness .I forgot how much passion and energy Austin once had, until this moment. Hunting had now become one of the greatest joys in his life. Throughout the painful years Austin constantly had a hunt to look forward to. From pheasants to turkeys, and oh boy does he love hunting turkeys! I sometimes think he's turning into a turkey. He has perfected the calls often waking us up early mornings. Goose hunting has also proved to be a favorite, especially when they are on our dinner table. Austin is so proud to provide our meal, it was great when Shad's dad said dang boy you've done this before. What would have been the worst years of his life were now becoming the most memorable. Later came fishing for Walleye with Don. Austin had never pulled in a fish of this size before. We all were eating his catch for months. Austin has since been hopeful to someday guide his own boat on the ocean. And lets not forget about the deer hunt. This hunt was what I tell everyone changed my life. It wasn't even about getting a deer, just to be away in the woods in such a beautiful cabin with other people that, just Get It! The guitar playing & singing, playing spoons, posing for weird pictures dancing around the huge blazing campfire in below zero temperatures, as the guys wrestled in the snow. When bed time came we crawled into our bunks with great friends and talked about some of our biggest fears and how much we had overcome in the past with our children. I felt safe to talk to others who really understand. Our family is so honored to be part of this wonderful collection of people who care and give so unconditionally. Throughout these experiences Austin has hope and support to have a second chance at life as this organization has helped Austin transition from a cancer patient, to a proud confident cancer SURVIVOR today! Thank God for everyone of you!! Until the next experience ... I know Austin has been dreaming big!! 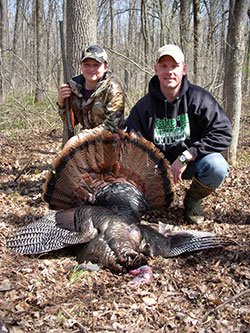 Our family would like to thank you for a wonderful Youth Turkey hunt you took our son Brandon too on April 7th. Brandon was diagnosed with Acute Lymphocytic Leukemia the day of his first birthday. He was finally able to beat Leukemia after a long and difficult year of treatment. His treatment only lasted a year, but the negative effects of the experimental treatment that saved his life are now rearing their ugly head. Attention issues, comprehension problems and many other areas vital for a child to succeed in school are now affecting him. He is also dealing with social problems that have arisen due to his time away from other children and the treatment he received.

Brandon loves baseball, fishing and getting out hunting with family. Normally he is very slow when getting up in the morning, but not that day. He was up and ready to go. I know he was excited about the hunt, but the problem he has with hunting is being too antsy to sit for any extended period of time. I was truly amazed at how focused he stayed while in the hunting blind. Soon into the hunt Brandon saw some Turkeys and I could see the excitement. He didn't get a shot off but was very excited about getting the birds in so close. A little while later, Shad was able to call in another group that included 4 Tom's. Again he wasn't able to get a clear lane to shoot and these birds took off. Then another Tom came running in and Brandon got his first shot off. Missed. We decided to go for breakfast and then back out for more hunting. About an hour and a half into the second try one Tom and four Hen's came in. The hens were around the decoy, but the Tom stayed on the outside almost as a look out. We waited for about 35 minutes before Shad decided to try calling him in. He got to about 25 yards and Shad gave Brandon the signal. Blam and one Thunder Chicken down. I did not see the bird go down from my angle, but as a father I could not have been anymore thrilled just seeing the reaction of Shad and Brandon. It is a sight and experience I will never forget. I tear up every time I recall it.

We weren't able to get an official weight, but our scale at home had the Turkey at a little over 29 pounds. It had a 9-3/4" beard and 1-3/8" spurs. This bird would have been in the top 10 in Wisconsin if we were able to get it officially weighed. I wish I could have found a weight scale to get him in the record books and feel bad as a father that I did not get it officially weight. When I told him of where it would be in the record books, Brandon just looked at me and said "Dad, we will have to get a bigger one next time!".

Thank you for everything you did for my son and for other children whom have gone through serious illnesses. It means everything to these children and to their families.